You are here: Home » Our History

A Narrative History of Redeemer 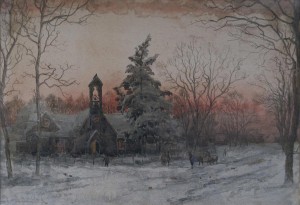 In 1852 The Church of the Redeemer was founded as the second Episcopal Church in Morristown, New Jersey, by a group of people who left St. Peters Episcopal Church Morristown. The reason for the departure was because of St. Peter’s increasing alliance with the liturgical changes associated with the Oxford Movement. These founding members of Redeemer wanted a church and worship service reflective of their values and concerns. Today, people still attend Redeemer for the same reasons.

Over time, Redeemer became one of the largest parishes in the Diocese of Newark. The parish campus contains three separate stone structures: a Norman Gothic church seating 375, a two-story Parish House, and a twelve-room rectory. In the 1940’s, average Sunday school attendance was over 200. There were several choirs, some containing as many as 60 members. The church was filled to capacity for Sunday services.

As years passed, Redeemer expanded and contracted.  Like many churches, its clergy have shaped the congregation, and vice versa. One notable period of transformation came during the 1990’s, when Philip Wilson was the rector. His vision of the congregation as a liberation community committed to justice began to come into focus when Eric Johnson, the son of lifelong members of the parish, contracted AIDS and came home to live out the last year of his life. The parish realized that AIDS was no longer about “others”; It was about them. Members of the parish began to take AIDS buddy training. This training soon found a home in the parish. The parish then conceived the idea of converting the stone rectory into an AIDS Residence. The Eric Johnson House for people living with AIDS was opened in 1993. An AIDS chapel was created in the church, containing Redeemer’s AIDS quilt.

The vision of liberation and justice began to affect all of Redeemer’s commitments. Members of the parish made a commitment to name and address their own racism, and a Racial Dialogue Group was established. Martin Luther King, Jr. Sunday became a major holy day in the parish. King’s picture and the Black Liberation flag were placed in the nave of the church. Eventually a five-week liturgical Reconciliation Season, built around the songs and images of the Underground Railroad, was created to call the congregation to look at both racism and wider liberation issues.

In 2002 Dr. Sheryl A. Kujawa-Holbrook of the Episcopal Divinity School in Cambridge, Mass., featured Redeemer’s model of diversity as one of six faith communities featured in her book, A House of Prayer for All Peoples. 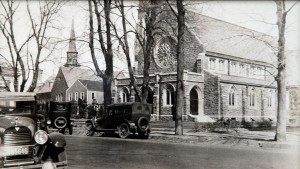 Committed to ending the language of sexism, the rector and vestry made a commitment to inclusive language in the words and songs used in the liturgy. This meant selecting an inclusive language hymnal and seeking the efforts of talented hymn writers in the congregation to ensure that Redeemer’s music would speak to its vision of liberation.

Gay, lesbian, bisexual, transgender and queer people were fully welcomed into the parish family. Redeemer performed the first same-sex blessing in 1991. Today at Redeemer, an equal number of same-sex and opposite-sex marriages are performed. Because Marriage Equality had not yet been recognized by the Supreme Court, in 1999 the Vestry voted to use the language of “sacramental marriage” for all unions blessed at Redeemer. The vestry’s position was clear that, though the state can define what is legal, it cannot define what is holy. 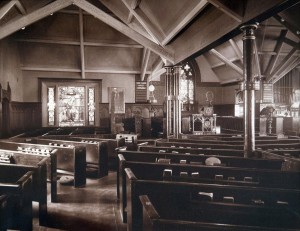 Worship at Redeemer began to reflect the vision of liberation; new liturgies were crafted. Special Sundays and seasons were created, including Recovery Sunday, Holocaust Remembrance Sunday, LGBT Pride Sunday, Celebrating Women’s Journeys Sunday, Creation Season, and Reconciliation Season. In order to welcome fully all people at the Eucharist, grape juice was offered along with wine.

When Redeemer called it’s first woman, and first lesbian rector, the Rev. Dr. Cynthia Black, in 2011,  its commitment to radical inclusivity continued. Redeemer became a church known for hosting community events. It has gathered people from the surrounding area in times of national tragedy, such as the Pulse Nightclub massacre, as well as for community-wide celebrations, such as Juneteenth.

Redeemer is committed to radical hospitality, welcoming all people just as they are. At worship on any Sunday, the congregation might include both Christians and non-Christians, believers and agnostics, as well as black, white, gay, straight, and transgender individuals.

Redeemer has been recognized for its model of what it means to be a community of faith. Its vision and purpose are immediately evident to visitors. In 1996, the parish was designated the Church of the Year in the Diocese of Newark, and in 2001 it was listed in Paul Wilkes’ book, Excellent Protestant Congregations, as one of the 300 outstanding Protestant parishes in the nation.

History of the Church of the Redeemer by Year

1852: Group leaves Morristown St. Peter’s to found the Church of the Redeemer. First wardens: William Duer, former president of Columbia College in New York City and Alfred Vail, who worked with Samuel F. B. Morse on the invention of the telegraph.

1853: Parish constructs first Church of the Redeemer, a wood building, at Morris Avenue and Pine Street in Morristown.

1919-1952: With Fr. Thomas Attridge as rector, Redeemer becomes one of the largest parishes in the Diocese of Newark.

1935: Stone rectory built at rear of lot on South Street.

1974: The Rev. Nancy Wittig of the “Philadelphia Eleven” is the first woman to celebrate the Eucharist at Redeemer.

1990: Creation Season developed at Redeemer. Has since been adopted by other Episcopal churches and dioceses. Vestry and rector make commitment to use inclusive language in all aspects of the larger second service each Sunday, while retaining use of Book of Common Prayer for 8 a.m. service.

1991: First Blessing of a same sex union at Redeemer.

1995: Creation of AIDS Chapel and Redeemer AIDS Quilt in the church.

1996: Redeemer designated Diocese of Newark Church of the Year.

2001: Redeemer named one of 300 outstanding Protestant parishes in America in Lilly Endowment study at University of North Carolina.

2003: Redeemer included as a chapter in A House of Prayer for All Peoples by Sheryl A. Kujawa-Holbrook for its program of racial dialogue and healing.

2007: Redeemer performs Civil Union of Cindy Meneghin and Maureen Kilian and many others.

2011: Cynthia Black becomes sixteenth rector of Redeemer; we begin “church exchanges” with Bethel A.M.E., worshiping in each others churches for MLK day and the feast of Absalom Jones/Richard Allen.

2012: Redeemer inaugurates the “Season of Sacred Story” during the time after Pentecost as a way to bring alive scripture and faith stories of lesser-known heroes.

2013: Six month observance of the 150 Anniversary of the Emancipation Proclamation takes place, concluding with Juneteenth party with Bethel A.M.E. on the front lawn.

2014: First RedeemerFest held, incorporating Juneteenth party, and sharing some of our vision and values with the neighborhood– under a big tent on the front lawn.

2020: Freedom House, an addiction and recovery program, becomes the new occupant of the former rectory on the church campus.