You are here: Home » Leadership & Staff

Cynthia Black joined Redeemer as its sixteenth Rector in June, 2011. Previously, she served churches in Minnesota (as Interim Rector of Epiphany, Plymouth), Michigan (as Dean of the Cathedral of Christ the King in Kalamazoo), and New Jersey (Associate Rector and Interim Rector of St. Peter’s, Essex Fells). During her 27 years in parish ministry, she has been a member of the Episcopal Church’s governing body, served as President of the Episcopal Women’s Caucus, and recently chaired the denomination’s Committee on the Status of Women. In 1995, she attended the U.N. World Conference on Women in Beijing.

In 2006, Cynthia was awarded an honorary Doctor of Divinity degree from the Church Divinity School of the Pacific, Berkeley, Calif., in recognition of her service to the Episcopal Church. Former Presiding Bishop Frank Griswold praised her, saying, “Her ability to grasp the many dimensions of any situation and to articulate them clearly and boldly have been a gift to the [Executive] Council and the church.” She received the Polly Bond Award of Excellence for the documentary Voices of Witness Africa, describing the experiences of gay and lesbian Anglicans in Africa.

Cynthia grew up outside of Boston, went to college in upstate New York, and seminary in California. Before ordination she worked as a house painter, pastry chef, and freelance trumpet player. The daughter of an architect and a travel agent, her myriad interests include travel, photography, cooking, woodworking, geocaching, and filmmaking that promotes the Gospel values of peace and justice. She is married to Dr. Rebecca Walker, a mathematics professor. 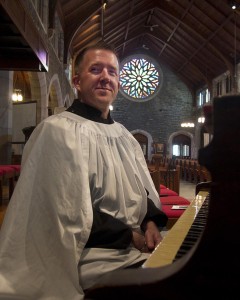 A native of Fort Wayne, Indiana, Chris earned his Bachelor’s in Music Education from Wittenberg University with an emphasis in Pipe Organ performance and Choral Conducting/Composition. While at Wittenberg, Chris was an active member of the nationally known Wittenberg Choir. Later, he earned his master’s degree in education. Chris spent 10 years teaching middle and high school choir in Holland, Ohio. While there, his choirs earned regional and national honors. Chris now serves as a music teacher in the Belleville, NJ, public school system. He’s been active in sacred music for the last 22 years, leading worship in a wide variety of traditional and contemporary settings. Chris’s music is published by Morningstar Music and Augsburg Fortress.

Chris is the father to three children: Drew, Dawn, and Natalie.

Sandra is originally from Sunnyside, Queens. She has been an Episcopalian since 1994. She was an active member of the Congregation of Saint Saviour at the Cathedral Church of Saint John the Divine, where she was the warden, co-chair of the Communication committee, chair of the Education committee and lay leader of the Sunday Healing ministry. She ran a successful program for poets and writers that lasted ten years and produced a popular anthology. She was an Administrative Assistant at the Church of Saint Mary the Virgin in Times Square and Christ and Saint Stephen’s.
She lives in Boonton and is the Communication Chair and member of the vestry at St. John’s Episcopal Church where she is also sings in the choir. 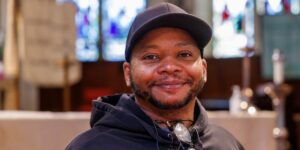 Curtis began as our part-time Sexton on the Monday of Holy Week 2022. We have been without a paid Sexton for too long, so it is great to have him taking over the cleaning from our hard-working volunteers. He has already excelled in making things spotless and is doing great work. We are so lucky!

Brian is a resident of New Jersey and an active member of Redeemer. Brian is the Assistant to the Celebrant, Worship Coordinator, Usher and much more.

Briceyda is an active member of the Church, primarily focusing her abilities in hospitality for “Coffee Hour” after services.  Her family assists with Chalice Bearing duties and beautification projects.  Briceyda’s family is originally from Cuba, and before that, from Spain.  As an immigrant, she is keenly aware of the strides that need to be gained for greater acceptance and parity.  Her spirit of service was further honed when she earned her law degree from DePaul University College of Law.  She now focuses the majority of her time on her family.  Gracias, Redeemer, por la cálida bienvenida.

Wardens — The wardens share in leading the parish and vestry. The wardens are members of the parish elected by the church membership. They work in tandem with the vestry and rector to implement a vision and oversee the church’s activities and welfare.

Vestry — The vestry is the governing board of the church. It consists of the rector, the wardens, and members of our parish elected by the church membership. The vestry creates a vision and oversees the church’s activities and welfare.