You are here: Home » News & Insights » E-pistle Blog » Proud of my Redeemer family…

Proud of my Redeemer family… 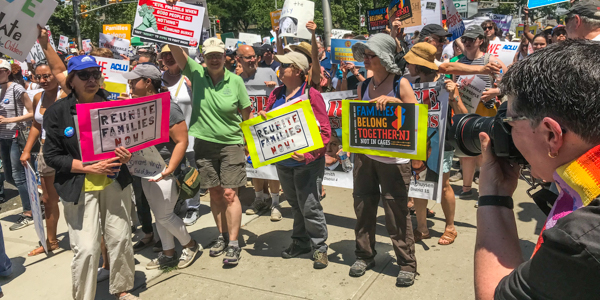 On one of the hottest days of the year, Redeemer showed its compassion once again, this time at the Families Belong Together rally and march in Newark on June 30.

It had been a long week. One that started with the Hasker’s funeral, included another horrific shooting (in a newsroom), news that a budget request has been made to build housing on military bases for 12,000 people who cross into the US seeking asylum, and a variety of Supreme Court rulings. The hardest part of that week was the revelation that a Supreme Court justice will soon be appointed.

After that painful week, when I found myself wondering what the future held, I realized I couldn’t spend too long worrying about the future, and I encourage you not too, either. Instead, I did two things: I went to see the film about Mr Rogers, and I went to the Families Belong Together rally and march in Newark.

Between those things, and spending time with all of you, I know that hate will not get the last word. The struggle may be long, but we are in this together. And we look to each other for the touch that will be the human extension of God, just as the woman with the flow of blood in Mark’s gospel did, carrying us through whatever we need carrying through– death, sickness, loss, or political craziness.

There was a wonderful Contemporary Reading by Anne Lammott that we heard the day after the Families Belong Together rally. Because of its length, we couldn’t use it all, so I shared the last part in my sermon.

I heard a story last week from a sober friend that almost completely captures my understanding of goodness and life, a story that has been medicine for my worried, worried soul:

Caroline stopped drinking 30 years ago, at the age of 40, with zero interest or belief in any kind of higher power to whom she might be able to turn when cravings overcame her. But after a year of white-knuckle sobriety, contemptuous of a higher power, hanging on through will power, she one day heard and then found a frog in her shower.

She lifted it and gently carried it in her cupped hands through the house. She could feel and, of course, imagine its terror. She took it out to the garden, where there was a moist patch of earth over near the blackberries, and set it down. It sat stock still for a bit, and then hopped away into the bushes.

She said, “My name is Caroline. I’m that frog.”

I am, too, and I am also a big helper. When I have felt most isolated and lost, I have always ended up being carried back to the garden in people’s good hands, to where I need to be, afraid and not breathing, for much of the way. And I have helped carry scared people, the best I could. You have, too.

Isn’t that what grace is, when some force of kindness, against all odds, with unknown hands, brings us from fear and hard tiles to a moist patch of earth, and sets us down?

If I were God’s west coast representative, I would speed up the process a bit, and hand out klieg lights, but I can’t. All I can do is to try and help you get back to where there is moist soil and fresh air, and let you help me. And those happen to be the two things I most want in life.